Ahead of the release of their debut album Sateen and to celebrate their confirmation as US tour support to Fu Manchu next month, RidingEasy Records (formerly EasyRider Records) has announced ‘Light Years Beyond’ as Electric Citizen’s debut single on the LA based label.

Following on from their recent premiere of ‘Burning In Hell’ on VICE’s Noisey, ‘Light Years Beyond’ is a new and as yet unheard track from the hotly tipped Cincinnati quartet which captures on record exactly what fans will soon experience first hand over the coming weeks. With exclusive artwork by Neil Krug (The Horrors, Boards Of Canada) the song is a swirling and ferocious concoction of guitars and drums encased in a four minute blast of rock ‘n’ roll ceremony, headed by the most enigmatic of high priestesses.

Formed less than a year ago by guitarist Ross Dolan, vocalist Laura Dolan, Nick Vogelpohl (bass) and Nate Wagner (drums) Electric Citizen has had a busy year turning heads and ears onto their dark and esoteric style of haunting and unhallowed ’60s West Coast and decidedly British-influenced psychedelic rock.

Like recent records by similarly ’70s possessed anti-modernists Blood Ceremony, Wolf People and Uncle Acid and the Deadbeats, ‘Light Years Beyond’ taken from Sateen, and the flip ‘Ghost Of Me’ was recorded and produced by fellow Ohioan and local stalwart Brian Olive (The Greenhornes, Soledad Brothers). Drawing on sounds synonymous with the roots of early ’70s proto-metal and groups such as Sir Lord Baltimore, Pentagram and the daemonic spirit of Amon DüülII, the single is an electrifying introduction to the winners of the Best Rock Band honour at the 2014 Cincinnati Entertainment Awards.

After performing recent shows with Dead Meadow, Spirit Caravan and The Sword the band take to the road over the next few months as official support to stoner rock Gods Fu Manchu on their North American tour.

‘Light Years Beyond’ will be available on 20 May 2014 and paves the way for Sateen which will be officially released via RidingEasy Records on 1 July 2014. 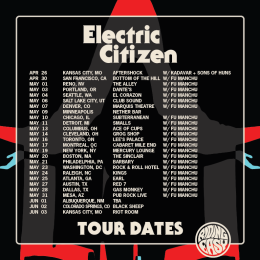