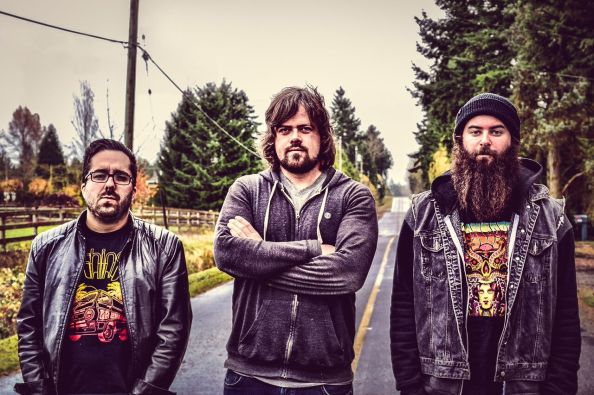 “We Hunt Buffalo have incredible things awaiting them, I wouldn’t try to stand in their way.”
Heavy Planet

Fuzzorama Records is pleased to announce the release of Living Ghosts, the brand new album from Canadian psychedelic fuzz rockers We Hunt Buffalo.

Formed in the suburbs of Vancouver in 2010, with their debut EP the trio introduced the underground to a new band that in the words of Georgia Straight were, “dedicated to tracking down and capturing a dying breed of rock and roll.”

In hardly no time at all the band went on to generate a local buzz around the city’s rock scene where they soon crossed paths with Tanis Gibbons, apprentice to Colin Steward at local recording studio ‘The Hive’. Cutting their first full-length with Gibbons in 2011 – the self-titled We Hunt Buffalo – the album packed hard hitting, fuzz rock grooves and psychedelic metal in the spirit of Queens Of The Stone Age and Soundgarden. Fuelled by local acclaim, the band continued to play dirty rock and roll in and around Vancouver to a mounting fan base and in 2013 went on to release the EP Blood From A Stone, recorded at Nimbus School of Recording Arts by Alex ‘Condor’ Aligizakis. Of the EP’s title track Exclaim! Magazine described, “A fuzz-bomb riff that would make Tom Morello proud. A headbanger’s paradise.”

Throughout 2013 the band toured and performed with the likes of Sleepy Sun, Band of Skulls and Biblical and was added as main support to Monster Truck on their cross Canada tour later that same year. Fast-forward to today and the band has racked up notable support slots with Red Fang, Cancer Bats, Chevelle, Danko Jones, Electric Six and Steel Panther, along with an unforgettable appearance at Victoria’s Rifflandia Festival.