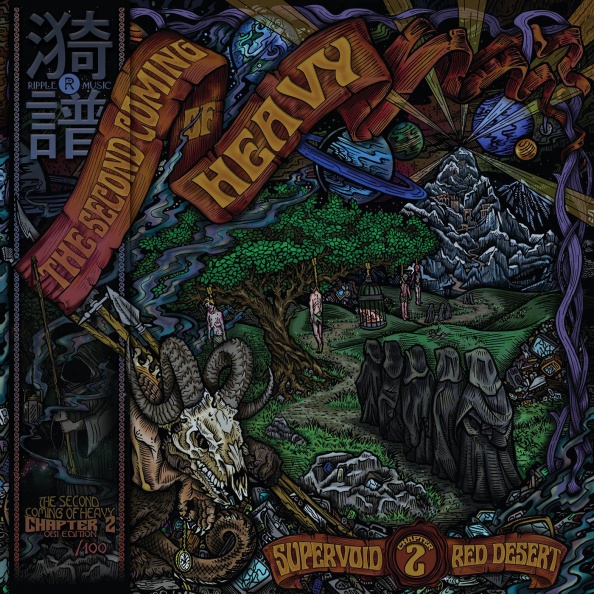 Already recognised as one of the world’s leading purveyors of Rock ‘n’ Roll, Stoner, Doom and Heavy Psych, Ripple Music upped the ante in 2015 with the arrival of one of the year’s most ambitious projects, The Second Coming Of Heavy.

Serving as an ongoing showcase for some of the best and heaviest bands emerging from the underground, each chapter will shine a light on those worthy of your attention. Consisting of one, 12” slab of multicoloured vinyl with full colour sleeves and inserts, the series is designed to be saved and treasured, like a fine anthology of books. So much so, when the albums are filed next to each other, the complete collection of aligned spines will form a “blow-your-mind image” direct from the rock underground.

The Second Coming Of Heavy; Chapter 2 will get an official vinyl release on 27th February 2016, limited to 100 copies and is on sale digitally now.

Formed in 2012, a group of like-minded Pittsburgh musicians came together to form what is now known as Supervoid. Releasing their first demo in late 2012, followed up by their debut full length in 2013, Supervoid blends many influences resulting in crushing riffs, high energy and huge dynamics. Never letting their style be restricted to one category, tracks range from big energy rock and roll, soul crushing sludge, and atmospheric melody. With song topics revolving mainly around space and the great unknown, lyrics involve both realistic and mythical stories that carry a message and reflect upon modern society.

Veteran Minnesota-based rockers Red Desert bring a unique and blended creation to the world of metal, combining heavy, deliberate elements of doom, the down tuned distortional fuzz of stoner rock, a unique and haunting vocal delivery, and above all a master craftsman’s grasp of song structure with deep, twisted, metal tapestries interwoven around soul stirring melodies of exceptional insight and dispatch. Prepare for a furious, full throttle ride as Red Desert come at you full force, no holds barred, no excuses, in a full out hard rock onslaught.