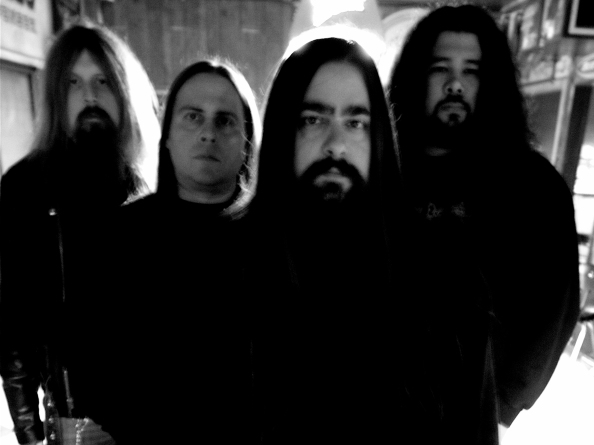 Ripple Music is thrilled to announce the release of Devil To Pay’s latest collection of paranormal/mind-bending rock’n’roll, A Bend Through Time And Space.

Channelling a hefty dose of heavy lyricism via metaphysical realms of consciousness, for Devil To Pay’s Steve Janiak the past decade has predominantly found the front man unearthing lyrics from what many might consider the “Other Side”. Attributed in no small part to the hallucinatory visions and flashbacks he experienced while hospitalized after falling deep into a drug-induced coma a few years ago, despite the doctor’s grim prognosis, Janiak thankfully survived with tales to tell. Albeit ones pulled from a well of perilous inspiration.

Following the release of the band’s retro-inspired, down-tuned debut Thirty Pieces Of Silver in 2003, Devil To Pay persevered, releasing the Crowbar-by-way-of-Kyuss influenced Cash Is King in 2006, and Heavily Ever After and 48 Minutes DVD in 2009, building a legacy through the slow burn of countless festival appearances, songwriting and relentless gigging.

After a mind-expanding epiphany in 2011, Janiak also began to explore links between the normal and paranormal, devouring anything he could find on the subject from eastern philosophies to books about the hunt for alternate universes. All of which bled profoundly into Devil To Pay’s lyrical themes. Through ten years of soul searching and survival – crawling out from the dank underbelly of the Indianapolis heavy music scene – Devil To Pay eventually established themselves in the underground rock community after signing to Ripple Music to release Fate Is Your Muse in 2013.

Recorded in 2015 by Mike Bridavsky at Russian Recording in Bloomington, Indiana, A Bend Through Space and Time picks up where its predecessor left off and further develops Devil To Pay’s songcraft and explorations in heavy, riff-oriented rock and roll. By now, followers of the band should have already heard ‘Your Inner Lemmy’ – the quartet’s fitting tribute to Motörhead legend Lemmy Kilmister and the first track lifted from this new record – released earlier this year. Described by Classic Rock Magazine as sounding like an authentic, “long-lost Motörhead song,” it serves as just one of many reference points, dotted across a constellation of hard rock influences at play on this, their best album to date.

A Bend Through Space And Time will be released on 12th August 2016 through Ripple Music. Stream and share the new song ‘Kerfuffle’ by Devil To Pay below: