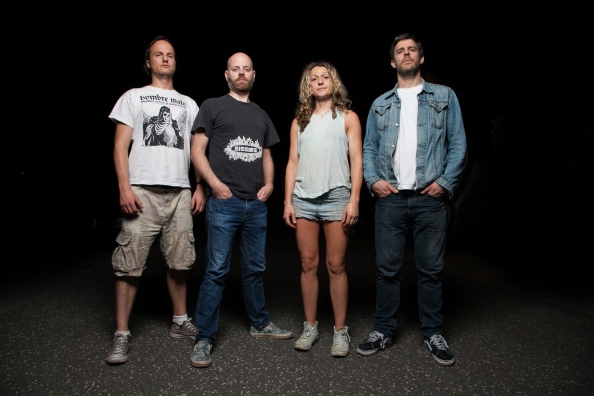 Signed to This Charming Man Records just one year after their formation in 2012, Hamburg-based doom/sludge trio The Moth are one of Germany’s leading underground lights.

Upon the release of their acclaimed debut album They Fall in 2013 the band was praised for harbouring a sound that cooked slow burning doom, thrash, rock and death metal via a metallurgy of riffs and bold ideas.

Geared toward full-metal apocalypse, that same sound was soon resurrected in 2015 on The Moth’s follow-up album And Then Rise, which drew justifiable comparisons to the likes of High on Fire, Mastodon, Crowbar and Kylesa. Picking up on the twin vocal play of bassist Cécile Ash and guitarist Freden Mohrdiek’s well-tempered Jekyll & Hyde-like aesthetic, the album was raw, ready and alive with ambition… and best of all, void of uncalled-for frills.

Off the back of tours and shows with Torche, Red Fang, Conan, Space Chaser and OHHMS, not to mention countless stages rocked at DesertFest, Svart Festival, Doom Over Vienna and Stoned from The Underground, The Moth return this November with their most anticipated album yet. Relocating to the same, small rehearsal room used to record their debut – deep in the belly of Hamburg’s infamous red-light district in St. Pauli – the band set about pre-recording their album Hysteria with close friend and producer José Lorenzo in September 2016. After laying down all ten tracks in one day and returning later in the year to rerecord and add vocals, they soon discovered that Lorenzo’s initial recordings best captured the band’s brutal and bewitching live sound.

With the addition of new member Christian ‘Curry’ Korr, brought in to share rhythm duties alongside long-sitting drummer Tiffy and the partnership of Cécile and Freden as full-on and fired-up as ever, Hysteria is the audacious product of a band at their deadliest.

“The title track represents the style of the whole album,” explains Cécile Ash. “That we only recorded each track maybe two or three times live and took the best version, you can really hear our character in it. We didn’t cut anything out. Imperfection is what we like.”

Released on 10th November 2017, Hysteria by The Moth will be available on This Charming Man Records. Stream and share the title track for Hysteria below: