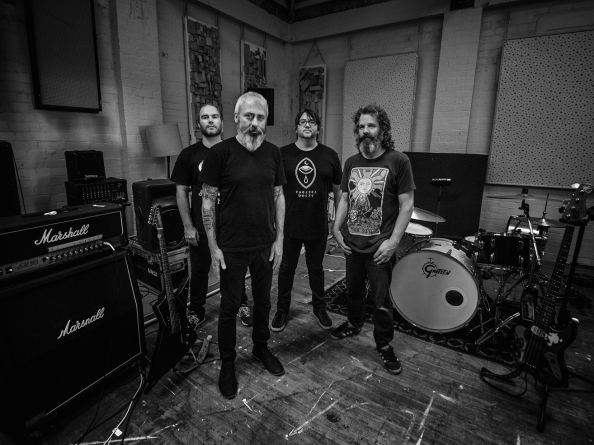 Returning in 2016 with what will undoubtedly become one of this year’s most revelatory releases, Beastwars are a band so heavy, and heavily admired by fans in the Southern Hemisphere, they practically weigh the world in place and stop it spinning wildly off its axis.

The Death Of All Things was produced by the band and James Goldsmith in their hometown of Wellington, New Zealand, mixed by Andrew Schneider (Unsane, Big Business) and mastered by Brad Boatright (Sleep, Windhand) and is the third and final full-length in a post-apocalyptic trilogy. An album that signals the arrival of one of metal’s best-kept secrets out from under; primed to take on the world full tilt.

In 2011, Beastwars released their self-titled debut to critical acclaim and in doing so transformed New Zealand’s metal landscape. Reviewers celebrated the album’s, “slow- burning furnace of bass-trawling riffage,” (The Sleeping Shaman) as well as its distinctive blend of lysergic and premonitory metal that compared the band to Kyuss, Neurosis and Godflesh, while hinting at influences as distinctive as The Jesus Lizard, Black Sabbath, and in Hyde’s ‘avant-grunt’, Celtic Frost. Music that at its very core channels a colossal mood filtered to a point where, “every wail, every riff, every bass thump and every cymbal crash serves to remind you that this is enigmatic and darkened metal, straight from the murky heart of the Antipodes.” (Sixnoises)

Two years on from their internationally acclaimed debut, Beastwars returned in 2013 with Blood Becomes Fire which landed at #2 in the nations music charts. The album delivered ten songs retaining all the strength and psychedelic fire of their first while presenting a powerful evolution in vision.

The Death Of All Things is released worldwide through Destroy Records on 22nd April 2016. On 11th March a pre-order for limited edition vinyl will be available from http://www.obeytheriff.com but in the meantime, you can stream and share their brand new video for ‘Call To The Mountain’ below: