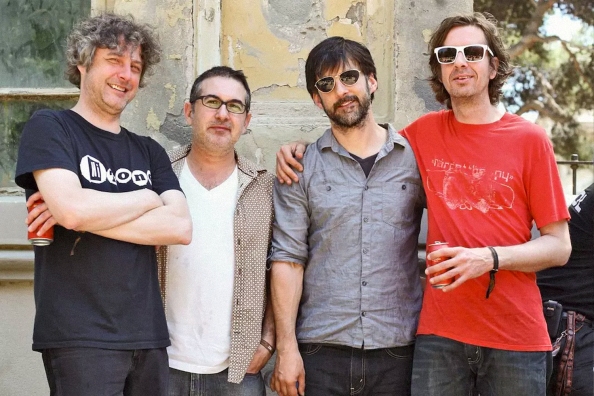 Die at the Zoo by Obits is released 30th July on Outer Battery Records!

Pitched somewhere between The Cramps’ Smell of Female and The Stooges’ seminal Metallic K.O, comes Die at the Zoo by Obits – a rare recording made in Brisbane in 2012 during the band’s inaugural visit to Australia.

Due for release next month on Outer Battery Records, this is the first live LP from the Brooklyn-based stalwarts who originally formed in the mid-2000s off the back of voracious discussions about pizza, rock music and everything in-between.

“I mean, this is a few centuries after European colonies pushed out the Lenape in the area,” explains founding Edsel vocalist/guitarist, Sohrab Habibion. “So naturally when Rick and I got together, the electric guitar was our central subject. His other group were starting to wrap things up, and we decided it’d be a hoot to play together.”

The “Rick” in question of course, being Rick Froberg; venerable guitarist, songwriter, artist, and leader of some of rock’s most influential nonconformists in Pitchfork, Drive Like Jehu and Hot Snakes.

Following a small but respectable number of sweaty and noisy live shows in and around Brooklyn, through a slew of iterations of the group’s early line-up, Obits settled into a home at Sub Pop where they released three essential albums; I Blame You (2009), Moody, Standard and Poor (2011) and Bed & Bugs (2013), along with a handful of indispensable singles. Many of which can be found right here on Die at the Zoo, captured in a manner befitting their awesomeness. Loud, melodious, alive, and amplified for paying punters who quite simply knew just how hard Obits rocked.

And as Habibion sums up Die at the Zoo best, “If you know our band and went to one of our shows, this will sound familiar. If we’re new to you, but you have equal amounts of affection for AC/DC and CCR as you do Wire and The Wipers, then together we shall set the dingoes free.”

Pressed on limited-edition pink vinyl and with artwork by Rick Froberg, Die at the Zoo is an absolute must for Obits fans old and new and can be pre-ordered now ahead of its official release on 30th July on Outer Battery Records – HERE