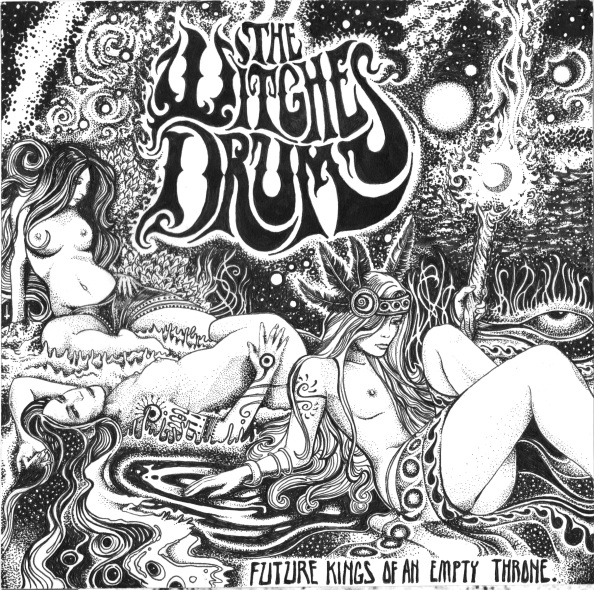 “While the songs are nuanced with many incredible layers of style and delivery, they will at any time come right out and slap you upside the head with sledgehammer blows and flamethrower fireballs.”
Heavy Planet

“The Witches Drum play elephantine psych into your soul!”
The Joy Collective

“Christ this is ace! A proper fucked up Deep Purple. Or Sabbath via the Stooges. The Cardiacs possessed by the spirit of The Sonics.”
Adam Walton, BBC Radio Wales

“These are tracks that waver violently back and forth between echoey, spaced out psychedelic noodlings and head bludgeoning riff/drum combos, each fit to propel a Viking war boat to Valhalla itself.”
Miniature Music Press

Having threatened to release an EP for some time, Future Kings Of An Empty Throne is the group’s first official release on the band’s own imprint Levitation Records. Recorded by Fudge Wilson (Exit International) at Sound Space Studios, over four tracks the band swallow influences and choke alchemy out of crowd rousing concoctions. From Beefheartian barks (‘Watch The Freaks Lose It’), tripped out San Fran jams (‘Filthy Closets’) and chugging Led Zep rock it’s a heady mix of ’73 era British blues and West Coast stoner doom with a heavy nod at the likes of Kyuss, Big Chief and Monster Magnet. Primordial, loud and the aural embodiment of sleazy rock ‘n’ roll.

As anyone who has witnessed their frenzied shows will testify, their reputation precedes them. A regular fixture on the local South Wales scene playing live alongside the likes of Thorun, Spider Kitten and Zinc Bukowski, front man Matt Fry’s glowering reptilian presence and the group’s embrace of long forgotten sounds (think Blue Cheer, Sir Lord Baltimore, Josefus et al) is truly something to behold. Like a crazed collision of Arthur Brown theatrics and weighty Electric Wizard vibrations, they’ve electrified gig goers with big riffs and unforgettable shows. Most memorably at Cardiff’s annual Sŵn Festival, with a storming set and weekend closer.

Track Listing:
1. Watch The Freaks Lose It
2. Filthy Closets
3. Fishin’ For Ships
4. Climb Aboard The Bus Of Devotion

More praise for The Witches Drum:

“I’ve only just heard their brand new EP, which is called Future Kings of An Empty Throne. And it’s magnificent in its darkness and although it’s not doing anything new it’s doing it with such conviction and spirit who cares about newness!” Adam Walton, BBC Radio Wales  “This salacious set of psych-rock tracks is genuinely rather brilliant. ‘Stop (Giving Me Hell)’ has the ’70s riffage of Free alongside spacious wig outs and gravelly vocals. Get Down’s tribal whooping compliments the underlying swamp-rock instrumentation. However, it’s in the longer, Grateful Dead inspired free-form tracks such as ‘Incompatible’, ‘Lost In The Wilderness’ and ‘Tunnel Of Hitchcock’ where the band excels. Lilting between drifting, dreamy soundscapes and harsher guitar-fed moments of energy. We want more.”
Miniature Music Press

“Raging against the dying of the light. Terrified of Monday morning, The Witches Drum front man is resplendent in green face paint and marigolds, like Alice Cooper as a 70s, Saturday afternoon wrestler. It makes no sense. It’s the perfect end.”
James W Roberts, BBC Wales Music

“Although the group have an obvious love for all manner of indulgent ensembles extant between the first Jefferson Airplane album and the fall of Saigon, at times they recall bands from the ’90s sucking on the ’70s: Big Chief (‘Filthy Closets’), Clutch (‘Fishin’ For Ships’) and on the opening song, Monster Magnet. None of these recollections are at all bad things.”
Noel Gardner, Buzz Magazine

“One of the only new acts in South Wales to fully embrace the immense legend of Blue Cheer, forgotten Houston legends Josefus, Electric Wizard, and even The Doors, there was no finer and surreal way to end Swn festival. Lead singer Matt Fry’s Crazy World of Arthur Brown getup; a glittering, glowering reptile pirate channelled via the spirit of Jim Morrison led a spellbinding master class and ensemble of bass, pounding drums and Kyuss guitars.”
Beats Per Minute