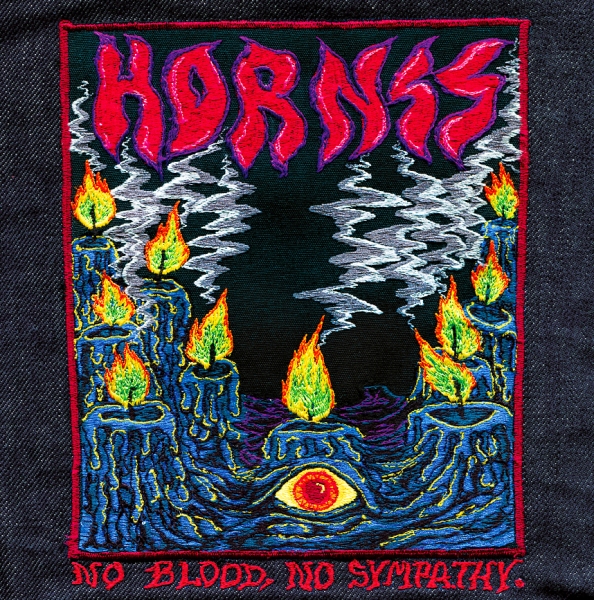 “This is a collection of songs that pay tribute to the greats of Stoner Rock, while standing thunderously groovy on their own. Definitely worth checking out if you have an appreciation for Rock ’n’ Roll.”
CVLT Nation

“No Blood, No Sympathy takes great and efficient pleasure in crossing the line between heavy rock and metal. Rolling groove with gnarled-distortion, it portrays the crossover punk roots of early thrash with a modern twist of fuzz and satisfying runs of bass.”
The Obelisk

Unlike some who are content to adopt that desert sound, San Franciscan trio HORNSS were born into it. Moulded by it from the very beginning in the case of members Mike Moracha and Nick Nava, who originally got their start in the Palm Springs band Solarfeast alongside ex-Kyuss/Evolution’s End member Chris Cockrell.

Formed in 2010 with a line-up completed by drummer Bil Bowman (formerly of Zodiac Killers, blackQueen and Scrog) HORNSS have taken to the stage in support of Fatso Jetson, Naam, Windhand, YOB and The Freeks and are every inch the band you’d hope they would be given the ancestry, influence and arid air that forged their formation.

Thanks to the LA based label EasyRider Records, this May the trio will have a debut album to call their own. Recorded at Earhammer Studios in Oakland with Greg Wilkinson, if you were sold on the strutting doom groove of their demo The Red Death then No Blood, No Sympathy is going to blow your mind and then some. Drawing on influences such as Hawkwind, St. Vitus and The Ramones HORNSS deliver devastating doom, death punk fury (both Mike and Nick were also founding members of San Fran punk band The Jack Saints), stoned out meanderings and crushing desert progressions that will strike a chord no matter where your allegiances lie.

The band take to the road throughout August/September for a European tour in support of their debut album No Blood, No Sympathy, which will be released via EasyRider Records on 13th May.

EasyRider Records:
Formed in 2013 out of the sleepy beach town of Hermosa Beach, Los Angeles, EasyRider Records is dedicated to unearthing the finest in heavy psych, doom, stoner and rock music. Products include limited edition runs of vinyl and cassettes with creative packaging and the label has ten bands currently signed to its roster; Electric Citizen, Salem’s Pot, Slow Season, Albino Python, Sons of Huns, Black Prism, Old Man’s Will (US only), Monolord, Shooting Guns and Spiral Shades. EasyRider Records has also secured the exclusive rights to cassette releases by Sleep, Witchcraft, Kadavar, Graveyard, Valfader, FUZZ and Orchid, with more titles to come.