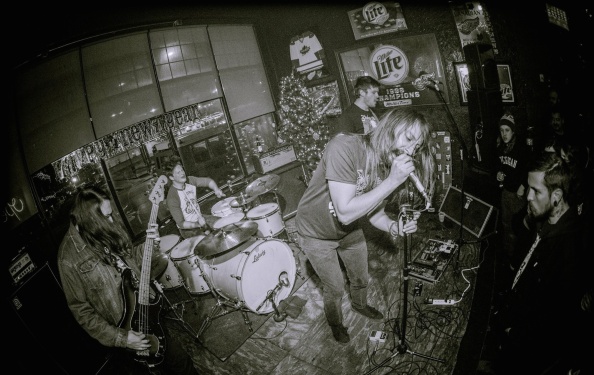 “You might as well just give up, submit to the groove of the riffs, the psychedelic instrumentals, and the soaring vocals. The music surrounds you and swallows you whole. Let it consume you; it’s easier that way.”
Stoned Soda

Worshippers of volume, Bison Machine have gained a reputation for their frenzied, high velocity live shows, welding Graveyard and Pentagram influenced shuffles onto the back of 70s Motor City rock and 90s stoner grooves. If you’re a fan of pounding, colossal blues and heavy Zep-driven riffs then the Hamtramck four-piece’s gnarled and muscular guitar and vocal work on tracks like ‘Cosmic Ark’, ‘Gamekeeper’s Thumb’ and ‘Viking Hand’ will leave you floored, broken and bloodied.

Along with news of their official album release Bison Machine take to the road this month for a run of five dates alongside New York’s heavy bluesers Geezer as part of their Mind Over Mountain tour.

Hoarfrost by Bison Machine will be released on CD and limited, high performance 180g vinyl on 10th July via Kozmik Artifactz/Bilocation Records