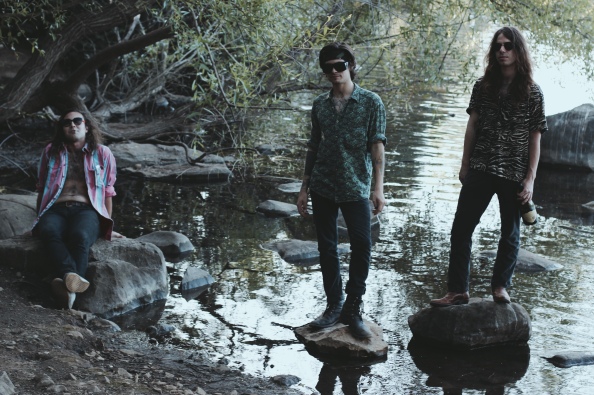 The exact moment of Dealer’s formation is almost impossible to pin down. Lost in a fug of thick smoke, alcohol and noise; somewhere and someplace out of time and mind.

Tentatively starting out life as Sexless – featuring founding member Kevin Klausen on guitar/vocals and fellow Los Angelean Samantha Mancino on drums – the duo would make a habit of throwing open jam sessions to anyone in earshot. Years prior and by his own admission, Klausen had lost heart after numerous false starts attempting to form his own band and gave up on making music to assume the mantle of tour manager for close friends, The Shrine. Helping the band across Europe and struck by their professionalism, after years on the road he returned in the Spring of 2013 with a handful of songs and a newfound focus.

“After seeing all these straight ahead rock and roll bands everywhere we went, I was really eager to start my own project but wanted to do something totally different,” explains Klausen. “We started out as this grungy weirdo dissonant punk band. In the early days we treated it more like a sort of art statement rather than a categorical band, it was really abstract and fun but in a way very naive.”

Relocating to Oakland, Sexless performed their first few shows with whatever bassist they could land until the night they met Aaron Cundy of local outfit Easy Living. Followed soon after by the conscription of John Zamora on drums after the departure of Mancino they soon hit upon the sound they were seeking. Sorely shredding their way through discordant moments of pre-punk history – often in a crazed reverie of hard rock solos and cocksure hellfire – they stalked the grooves of Black Flag’s Slip It In and the riffs of Voivod’s Killing Technology. All the while, sporting the sharpest Canadian tuxedos they could find.

When Zamora eventually chose to leave the band in May 2015, Klausen and Cundy sought total reformation. Drafting in new drummer Darien McKinney for shows with the likes of The Shrine, Ho99o9, Lecherous Gaze and Joy, they performed their final gig as Sexless on 4th June 2016 before entering Earhammer Studios to record their debut album with producer Greg Wilkinson (Iron Lung, Graves at Sea, Lecherous Gaze) just two days later. A proposed, “cocktail of heavy metal, punk, grunge and rock and roll,” the trio emerged with Billionaire Boys Club in hand as Dealer; the Leather-Era…