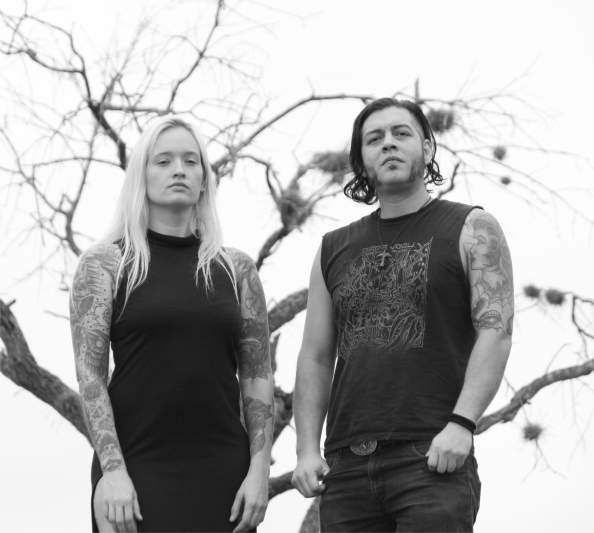 Artificial Head Records is pleased to announce the signing of psychedelic sludge band Cursus and with it the release of their self-titled debut album this April.

Taken from the Latin word meaning “course” – specifically the mournful paths our ancestors once took to bury their dead – the San Antonio-based paring of guitarist/vocalist CJ Duron and drummer Sarah Roork first came into being in the winter of 2013 with the release of their Summer Solstice Sessions demo. Influenced by the likes of Om, Neurosis, YOB and Ufomammut, and deep in experimentation with different sounds, instruments and drone frequencies, the demo slowly unfurled colossal riff driven soundscapes that permeated and punched in equal measure.

Released through Bandcamp it quickly caught the ear of label boss and fellow Texan, Walter Carlos, who signed Cursus on the spot to his Houston-based label Artificial Head Records.

“I had toured with Cursus a few times over the years and I’ve always admired their massive sound. Their ability to crush bodies in the room with their songs is uncanny,” explains Carlos. “Initially, we were going to release a live cassette by the band from recordings they made while on tour. But as the project kept going, we decided that a full-length studio album would be better and we’re proud to have Cursus as part of our family.”

Three years on from the release of Summer Solstice Sessions and Duron and Roork have their debut album loaded. Produced in a basement-recording studio by close friend Chris Dillard, over six devastating songs Cursus summons personal and spiritual pains and turns each into amplified dirges packed with riffs, hypnotic string arrangements and spellbinding percussion. With the power of cosmic doom burning brightly, distortion slams hard into 6/8 rhythms as the Duron and Roork charter a longboat through a magnificent storm of ethereal destruction.

Cursus’s self-titled debut album will be released on vinyl/digital on 28th April 2017 via Artificial Head Records. Stream and share new song ‘Waters of Wrath’ below: