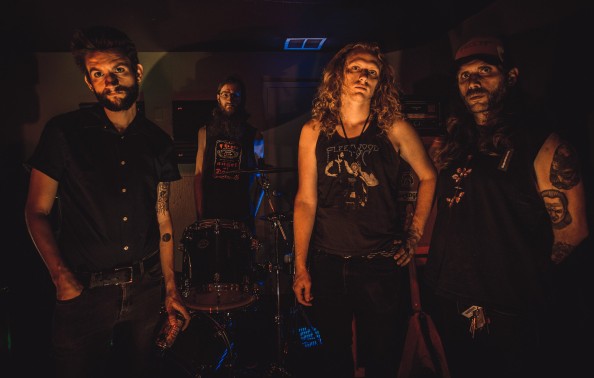 From deep within the belly of the beast, Texan harbingers of doom Destroyer of Light rise in 2018 with the release of a brand-new EP and string of West Coast tour dates throughout North America.

Hopeless EP is the latest in the Austin-based quartet’s devastating canon and will get an official release on 11th May through Heavy Friends Records. Containing two, practically feature-length tracks which set out to fill the silence between the praise of last year’s Chamber of Horrors and the promise of their follow up full-length next year, the EP charts an ominous course into the heart of darkness which deals directly with depression, suicide and drug addiction. Reworking the grim theatricality and crushing, heavy metal dirges of their earlier recordings, death and destruction is very much the order of service but with a new and somewhat progressively charged life-force.

“With Hopeless, I wanted to focus more on my clean singing, and our song writing has become more melodic while still maintaining the heavy riffs,” explains guitarist/vocalist Steve Colca. “We don’t limit ourselves to what we write, and the direction you’ll hear on this EP is a taste of what’s to come in the future.”

Unmistakably influenced by the likes of Electric Wizard, Mercyful Fate, EYEHATEGOD, Sleep and Autopsy, along with countless literary and horror anthologies, this new EP signals a massive shift in potential and a development that will see the band step out of cavernous, dank basements and into psychedelic realms hitherto unknown. What’s more, on their way to that strange place, over the coming months the band takes to the road for an extensive West Coast tour (see tour info below) in support of Hopeless, which will be released on 11th May 2018 on Heavy Friends Records.

Stream and share the new video for ‘Nyx’ – as premièred on Decibel earlier this week – right here: