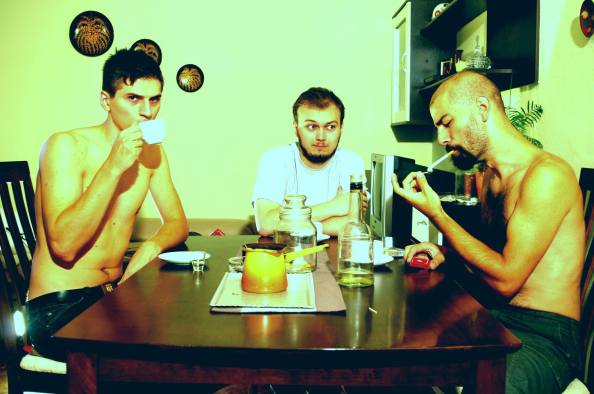 Hailing from the city of Bjelovar in Croatia, Them Moose Rush are a rock band unlike any other. Working in a genre fuelled by pomp and circumstance the Eastern European trio have always done things for themselves, and in doing so, have done said things inimitably.

Combining vintage vibes with math-rock, prog and unusual time signatures their approach to making music explodes with innovation. From directing their own videos, hiding cyphers in songs (Morse code riffs for keyboards, anyone?) and simply rocking harder and faster than everyone else, this month Them Moose Rush return with their first offering since 2018’s critically acclaimed, Don’t Pick Your Noise.

“All of the songs on our new record are titled with names of our heroes dancing through a conceptual maze where every one of them has a unique path and goal to reach,” explains guitarist/vocalist, Nikola Runjavec. “Some of them are famous, but it just sounded weird and fun. For example, Dolly Parton is shaving her monkeys in one of our songs. It’s really a cool scene if you just try and imagine it.”

Leading the charge on behalf of new album Dancing Maze (released this May on TMR Record) is the brand-new single, ‘Jude’s Got Another’. Heralding a radical shift in sound, style and substance, as you might expect, both song and video come with no shortage of DIY fanfare. Cats, balding Russian mobsters and volatile chemical compounds combine with searing angular riffs, devastating vocals and a neon battle tank of a rhythm section, fuelled by the majesty of electric rock and roll and bass grooves. As Runjavec best explains, “Its goal is to be unconventional, but catchy at the same time. Ultimately, we want you want to dance like nobody’s watching.”

Ahead of the release of the band’s third album Dancing Maze on 15th May via TMR Records, watch the crazy new video for the band’s first single ‘Jude’s Got Another’ below.

“Don’t Pick Your Noise sounds like an album someone poured out of a blender after mixing Destrage, Sikth, At the Drive-In, and a dash of Primus. Proggy, catchy, and weird as hell.”
METAL INJECTION